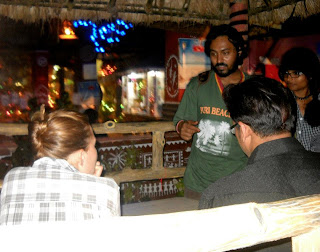 I launched the campaign on the closing day of this years' BYOFF. Thanks to Mr. Gurpal Singh who kept on encouraging me to go for it throughout the festival. If he was not that pushy I don't know whether I'd have started the campaign there (as I thought earlier) or not. Actually I was quite depressed due to a lot of things. During the presentation of my film, in his introductory speech, Mr. Singh all of a sudden started speaking about the campaign. Surprisingly, an old man of around 60 years (pure guess!) took out a 100 rupee note from his wallet and said, "Here is your one rupee. Come take it." That is precisely how it all started on the 23rd of February, 2012.

On 24th, I was feeling enthusiastic enough to run and get some print outs etc for the campaign but again, I lost all the energy by the evening. Mr. Singh probably could guess it. He came again to inspire me while I was just drinking beer out of nothing, sitting inside a cottage or something like that. He asked me whether I've started collecting the money or not. I thought damn man, what am I doing! Am I going to do it or not!

The feeling kept on being felt till I rushed to the open stage to make an official announcement on the evening of the 25th. Not that everyone accepted it with open mind but all's well that ends well. I gathered Rs. 2,444 by the end of the festival. This initiative also got mentions on the BYOFF coverages of Midday, Long Live Cinema and Dear Cinema.

The fundraising did begin finally!
Hoof!
Posted by Roy Anamittra at 11:29 AM