In Kolkata and Kicking! 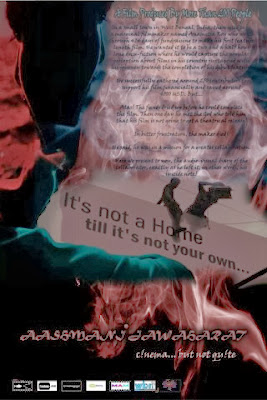 The Final Cut is ready, the film is not.
During shoot we captured sound on location with low-end instruments. That's what we could afford for a 132 minute film to be shot not only in the suburbs of Bengal but also in Kolkata, Delhi, Bengaluru, Mumbai and Goa within a budget of 3,00,000 INR. Even songs were recorded that way. The tracks by Urban Saint; they recorded and mixed those on their laptops. So, no wonder that we are now unhappy with the audio! We want to go through the whole sound designing process now, and again, we don't have a penny left for that. Dubbing, ambiance, songs --- it's just not possible. But of course, if we can arrange the funds, the film's impact would get multiplied to four-five times at least.

It's watchable, but not hear-able, so to speak. Even if we call it hear-able, it's just not bearable! We are missing the good audio this time. Let's see what we can do. By the way, there's a probability of a good news. We are not going to reveal it yet. There is something, you'll have to wait till 2014. And if it happens, we must be financially ready for it.

Finance, finance finance! Why can't we just take wind and water and soil and make a film out of it? The need is much higher this time. Don't be afraid, we won't be coming to you again asking for your hard earned precious money unless you step forward yourself. Revolution is for facebook! Revolution is a popular stance! Ultimately the wine party and eating out during the weekends are more important than any social revolution. So, left for the marginal filmmaker is nothing but pennies.
Of course there are still good people on earth who usually do what they say, most importantly they act instead of just talking like the rest 90%. But 10% just can't make it happen. They can always inspire and encourage us by sending in their token of love and support. Able to save us now, is either gap finance or co-production! Let's see

By the way, there's an extended promo live on youtube now. It's still unwatched by most of the people who follow us on different social networks. Have a look, share if you think it's worthy. The video is embedded below.
Thanks